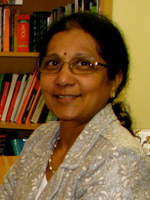 In July 2017 Dr Ammaji retired from practicing medicine and we wish her every happiness in her retirement.